Akram Ali – The American Arab & Muslim Political Action Committee (AMPAC) host its 4th Annual Gala celebration at Greenfield Manor today. This is gala serve to announce the year’s AMPAC endorsement selection and introduce candidates to the community as well as an emphasis on the importance of civic engagement to mobilize the community to become more politically engaged. There were many attendees participating in this event.

The AMPAC serves as the community’s effective voice and as the distinguishable structure accountable to advance, educate, integrate, and advocate the American Arab and Muslim communities’ interests through empowering and mobilizing at the grassroots across all domains of political, social, and economic actions, including civil and human rights.” I am not a political man, but the political effect on our daily lives. The water we drink effect by political, the air we breathe also effect by political, and everything in life’s effect by political. We all need to come together and going to vote” Abdullah Sheik said, the president of AMPAC.

The AMPAC efforts to organize American Muslim Community in Dearborn to increase the number of voters in Dearborn and other cities.Also, AMPAC announced endorsements for many highly-qualified Democratic Candidates running for state and local races in Michigan among these candidates were, Aman Fidam for Dearborn School Board, Adel Mozip for Dearborn School Board and the other 4 candidates running for Dearborn Board School,John John C. Cahalan for Wayne County Circuit judge and Abdullah H Hammoud for Michigan State Representative.

This Gala will serve to announce this year’s AMPAC endorsement selection and introduce our selection to the communities and our community leaders.
The goal is to spread the importance of civic engagement to mobilize our communities to become more politically engaged.
END_OF_DOCUMENT_TOKEN_TO_BE_REPLACED

Our community has made history by sending the first American Muslim women to the United States Congress, Rashida Tlaib, who won the Democratic nomination in Michigan’s 13th District.

Though AMPAC has endorsed Dr. Abdul EL-Sayed who lost to Gretchen Whitmer in the Democratic primary election for Governor, Dr. El-Sayed ran an unprecedented campaign that inspired our community to get engaged and participated in larger numbers to vote. Dr. El-Sayed has caught national and global attention as well.

AMPAC efforts has managed to organize American Muslim Community in Dearborn to move the usual average number of voters number from 15% turn-out to newer higher level of 35 % (21052 registered voters in Dearborn).

AMPAC also recognizes the role and efforts of the volunteers who worked tirelessly during this election season. We extend our thanks and appreciation to the numerous community activists and groups who contributed tremendously to the success of the campaign

“AMPAC on behalf of our community salutes and congratulates the winners and wish them success in their endeavors to make Michigan more inclusive and stands against bigotry, hate, and xenophobia as well as working hard towards unity and inclusiveness,” said Mr. Abdallah Sheik AMPAC President. “We acknowledge and salute the tough work of Dr. El-Sayed who ran a unique campaign that motivated people to vote and get involved in the electorate process,” added Mr. Sheik.

We appeal to our community to be more participant and get involved in the next general elections in November. Those who are not yet registered to vote must do so as soon as possible. 170,000 American Muslims are registered to vote in Michigan, however, less than 50% usually vote. The culture of participation must be augmented to produce more results.

The American Arab & Muslim Political Action Committee AMPAC serves as the non-partisan community’s effective vehicle to advance, educate, and advocate for the American Arab and Muslim communities’ interests through empowering & mobilizing at the grass roots and supporting candidates to ensure that critical issues of concern are addressed at all levels of local, state & federal governments. ampacmi.org

AMPAC President was awarded “businessman of the year” by the City of Hamtramck Friday the 20th of April. The event keynote speaker was Mr. Eric Sabree, The Wayne County Treasurer. Congratulations Br Abdallah.

The 2018 State Endorsement Convention of the Michigan Democratic Party was held at Cobo Center in Detroit, Michigan on Sunday, April 15, 2018. The purpose of this convention was to endorse a candidate for Attorney General, a candidate for Secretary of State, candidates for State Supreme Court.
Dana Nessel won Michigan Democratic Party endorsement for attorney general, The convention also nominated Jocelyn Benson as its candidate for secretary of state and Megan Kathleen Cavanagh with Samuel Bagenstos for Supreme Court.
More news from AMPAC:

AMPAC is appealing to our community to get involved heavily in the local, State and Federal elections of this year.Primary elections will be held August 7 th , and General elections November 6 th . AMPAC will keep the community posted and updated about all the electoral activities through this year. Meanwhile, All citizens must register to vote before the August primary vote. Here is our April 12th email newsletter
Here is the latest newsletter from AMPAC Michigan 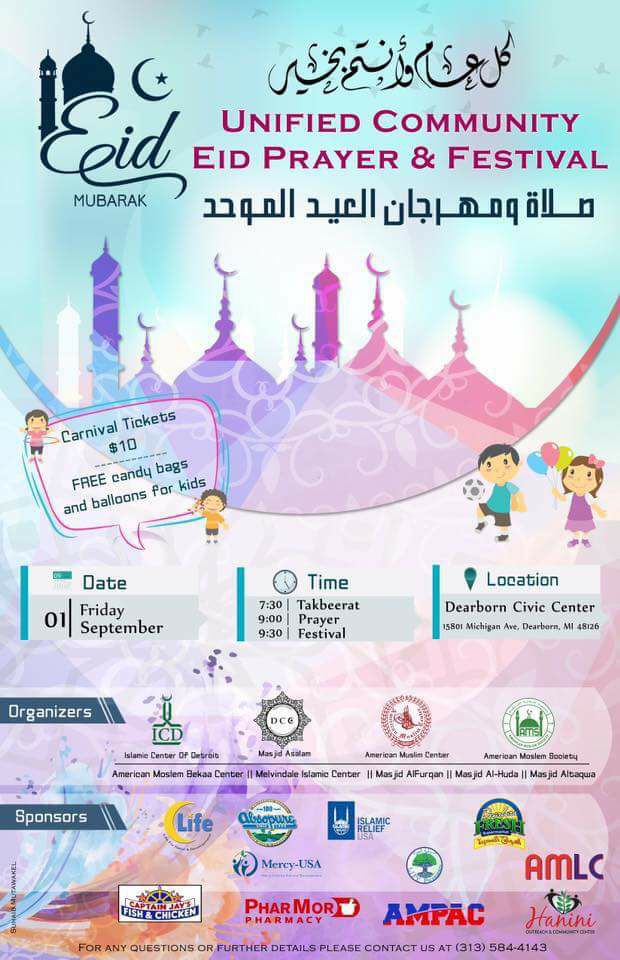 AMLC and AMPAC would like to wish you a blessed Eid and here is the information on the unified Eid Prayer and festival held September 1 in Dearborn. Dearborn’s “Civic Center” Map

Dearborn, MI: The American Muslim Political Action Committee has announced that the organization is endorsing a number of candidates for the City of Dearborn during this year’s Aug. 8-2017 primary election.

“This is the first time ever in the history of our Great City of Dearborn elections, with five candidates running for the mayoral election, another five candidates are running for city clerk office and sixteen candidates running for city council office,” said the board in the July 30 press release. “We have seen a high number of candidates who have the courage to rise up, with eagerness, dedication, and commitment to public service. These candidates have shown that they are civically engaged with all community members based on common collective active realistic, practical vision for a better and brighter future of our great City of Dearborn.”

The Committee is endorsing the following candidates:

The decision to endorse the above candidates was based on intensive assessment and evaluation and the analysis of the mayoral, city clerk and city council candidates by the AMPAC board.

“This decision is based on solid principles of unity, diversity, and equality to all citizens of our great city of Dearborn and each candidates ability to serve the Common Good and the best interests of the community,” said the board. “What’s ahead of us is bigger than all of us. What unites us is more than what divides us. Ignorance, arrogance and prejudice cannot help us move forward.”

Click here for a PDF of the official Press Release.