Even though the general election is over, the work is just the beginning for a new Dearborn and for Mayor-Elect Hammoud.  It is time is to unite and move forward serving the City of Dearborn.

The American Arab & Muslim Political Action Committee (AMPAC) calls upon all citizens of the City of Dearborn to actively engage in the city’s affairs as it is transiting towards a new administration and a new era.

In light of Mayor-Elect Abdullah Hammoud’s announcement of his transitional team and a website designated to keep citizens informed of all issues related to the city and its future, including job vacancies across all the city.  Visit www.dearborntransition.comfor more information and details. AMPAC encourage all to sign up for updates, read news updates and find any jobs that may be posted.

Once jobs are posted for the new administration, we encourage all qualified candidates to apply.  Qualifications are based on many factors such as credentials, education and training.

AMPAC will continue its diligent work and active engagement with the new administration and the community at large, serving the best interests of all the city’s residents. We are proud of the multicultural makeup of Dearborn and the rich diversity it represent.

“It’s important that residents keep their active engagement with the City and its leadership” said Abdallah Sheik, AMPAC President. “It’s all about our common future as one community” continued Mr. Sheik.

[Dearborn-Michigan, November 4, 2021]: The proud members of The American Arab & Muslim American Political Action Committee (AMPAC) would like to congratulate the winners of Tuesday’s historic general election that was held on November 2, 2021.

Citizens of Dearborn, Dearborn Heights and Hamtramck all elected an Arab-American as their mayor for the first time in history.

AMPAC extends its congratulations to all members’ incumbents and new members elected to City Council and the City Charter Commission in Dearborn and other cities.  AMPAC commends all the candidates who ran for public office during this election season. Running for public office takes huge commitment, hard work, and dedication. Their efforts helped shape the future of our cities.

AMPAC would also thank its volunteers as well as other campaign volunteers who worked long days and weekends over the past few months and especially those who weathered the cold on election day Tuesday, to help get out the vote for not only their candidate, but the community as a whole.

We at AMPAC are pleased to see that the turnout at each election increase as well as a much higher turnout of the younger generation. Your vote is your voice and your voice was heard loud and clear Tuesday.

“We salute all voters who exercised their civic duty and voted”: said Abdallah Sheik, AMPAC President. “We have a very promising future ahead for all of us and together we can advance people’s interests and overcome the challenges” continued Mr. Sheik.

AMPAC has released its endorsements. Please see them below.

The American Arab & Muslim Political Action Committee (AMPAC) announces its endorsements of for the November 2021 Elections. Early voting has started and elections day is November 2nd, 2021. 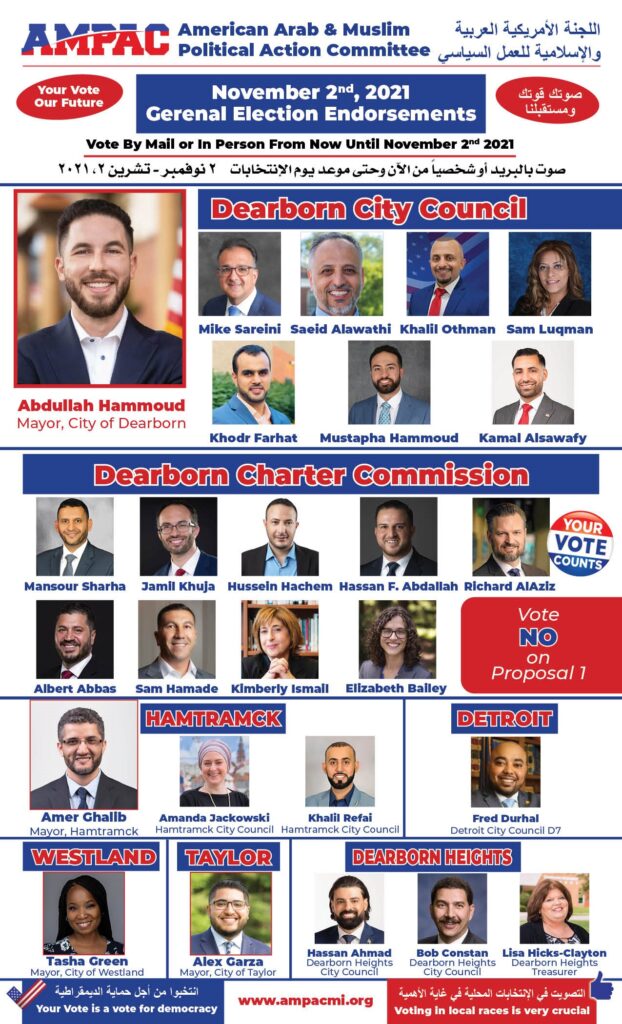 [Dearborn, Michigan October 6, 2021]: The American Arab and Muslim Political Action Committee (AMPAC) is pleased to announce its endorsements for the November 2, 2021 general elections across the State of Michigan.

AMPAC made its decisions after an interview process as well as deliberations regarding each candidate.  AMPAC’s decision is primarily based on each candidate’s qualifications, credentials, experience, record and their stances on issues of interest and concern to the greater community. In a democracy, it is important that the political process addresses the needs and concerns of all segments of society.

AMPAC’s endorsement process is transparent and thorough. Serving the public with integrity and respect is one great value in AMPAC’s assessment. AMPAC only reviews and endorses candidates who submit a formal request seeking endorsement

AMPAC urges citizens to vote for its endorsed candidates. Citizens can vote early from now until November 2nd via mail or in person at each city’s clerk’s office.

APAC reminds every one of the reality of COVID-19 and urges everyone to comply with all health precautions and instructions. AMPAC will continue its efforts to encourage citizens to register to vote as well as to urge all to vote on or before Tuesday November 2, 2021.

We have seen a high number of candidates who have the courage to rise up, with eagerness, dedication, and commitment to public service.  AMPAC wishes all of its endorsees success. AMPAC looks forward to working with all in the future.

AMPAC General Elections Endorsees: (Names are not listed in any particular order)

All candidates seeking AMPAC’s endorsement must submit a request no later than Saturday, September 18, 2021 (Deadline). Endorsement requests must be made in writing via email to office@ampacmi.org.

Upon completion of the endorsement process, AMPAC will make a formal announcement of the list of endorsed candidates for the November 2, 2021 General Elections.

AMPAC urges all registered voters to vote early and in advance via post mail, city clerk office or at your registered precinct on Election Day.  The impact of this year’s upcoming general  election should not be underestimated.

AMPAC appreciates every voter who actively participated and exercised their civic duty. The elected public servants will be making decisions that affect all of us.

The primaries this year were very important- especially in Detroit, Hamtramck, Westland, Taylor and Dearborn.  The primary in Dearborn was a historic event. Voters in Dearborn had to choose from among many good candidates for public office. There is no doubt that the mayoral race in Dearborn was the most heated.

AMPAC extends its warm congratulations to Rep. Abdullah Hammoud for receiving the most votes among the candidates for Dearborn mayor. We also congratulates Mr. Gary Woronchak for being the second top vote getter in the mayoral race.

AMPAC congratulates all its endorsed and other candidates who won the primary elections and commends all others who did not make it. This is the reality of elections and this the choice of the voters that we fully respect.  There will be other opportunities.

AMPAC calls on all voters to stay engaged, paying attention to the candidates and the issues. AMPAC will continue to assess and re-assess the candidates for the general elections.

AMPAC salutes the efforts of its members and volunteers who worked tirelessly to educate, inform, and helped get out the vote. AMPAC takes pride of the young and the youth who worked throughout the primary elections period and especially those who worked the polls the day of August 3rd.

AMPAC reminds all winning candidates not to take the voters’ support for granted. As one of several community organizations, AMPAC will continue its active role advocating for what serve the best interests of the community at large.

[Dearborn, Michigan June 7, 2021]: The American Arab and Muslim Political Action Committee (AMPAC) is pleased to announce its endorsement list for the August, 3rd, 2021 primary elections in Deaborn, Dearborn Heights, Westland, Taylor, Detroit, Hamtramck and across the state of Michigan.

AMPAC made its decisions after an interview process as well as deliberations regarding each candidate.  AMPAC’s decision is primarily based on each candidate’s qualifications, credentials, experience, record and their stances on issues of interest and concern to the Arab and Muslim community.

AMPAC’s only reviews and endorses candidates who submit a formal request seeking its endorsement.

AMPAC urges voters to vote for its endorsed candidates. Voters can vote early via mail or in person as of June 21 to August 3rd, 2021, Elections Day.

[Dearborn, Monday, May 17, 2021]: In response to President Biden’s position on Gaza, the American and Muslim American Political Action Committee (AMPAC) will be hosting a community leadership press conference tomorrow, Tuesday May 18, 2021 at 10:00 AM.

President Biden’s anticipated visit to Dearborn, the home of the largest Arab and Muslim American community in the US, comes amidst the ongoing Israeli war of aggression on the Palestinian people in all of  Mandatory Palestine, with Gaza bearing the brunt of this aggression.

The community leaders will convey a clear message to President Biden, demanding that the administration take immediate action to compel Israel to stop its war crimes and its other ongoing violations of human rights against all Palestinians, including those who are Israeli citizens. It has been distressing to learn that not only is the Biden administration refusing to pressure Israel, it has expressed support of this war, and stopped the UN Security Council from even issuing a statement calling for an end to the conflict.

Arab and Muslim Americans voted overwhelmingly for Mr. Biden, hoping for a moral foreign policy based on international law and respect for human rights. We see a failure of leadership on Palestine. Community leaders affirm that the Biden Administration should be an honest broker and end its unconditional and biased support of Israel.

No one is against peace. But there will be no peace as long as Palestinians are not only denied the most basic of human rights, they are on the receiving end of a campaign of violence and terror.  No one should allow that to continue. We won’t. We urge everyone to speak out.

Location: the parking lot of the AMS Mosque (nearby Ford Rouge Plant)

[Michigan, May 14, 2021]: The Arab and Muslim American Political Action Committee (AMPAC) in Michigan held a number of virtual discussions with American lawmakers to convey its concerns over the conflict in Yemen. These discussions are part of ongoing meetings and discussions that AMPAC organized and facilitated with elected officials to advocate for a sustained US involvement that would bring an end the humanitarian crisis in Yemen.  While humanitarian aid is needed and is vital, it is not the solution.  Ending the war requires the political will to end it.

On May 6, 2021,  AMPAC met with US Senator Gary Peters office regarding the ongoing war and the exceptional humanitarian crisis in Yemen.

On March 13, 2021,  AMPAC met with Congresswoman Debbie Dingell. AMPAC members and community leaders requested that the Biden Administration accelerate its efforts to induce the overdue process of ending the war, lifting the siege, providing immediate humanitarian aid, supporting dialogue between all warring parties in Yemen to bring peace and unity to Yemen.

AMPAC recognizes that the war in Yemen is not just a Yemeni conflict. It is also a regional conflict. Only a sustained international involvement will bring an end to the war.

AMPAC and community leaders urged US Senator Peters and Congresswoman Dingell to lead the efforts and help advance this community- government engagement at all levels. AMPAC continues to call on all members of the US Congress and the Biden Administration to act to help save lives in Yemen.

AMPAC acknowledges the complexity of the conflict in Yemen. Immediate measures are needed to help ameliorate the suffering. Therefore, AMPAC:

AMPAC expresses its appreciation to both US Senator Gary Peters and Congresswoman Debbie Dingell for their leadership in engaging in this constructive dialogue that is essential and is crucial to continue at all levels.

“AMPAC will continue its diligent work regarding the crisis in Yemen and other countries in the region,” said Abdallah Sheikh, President of AMPAC. “We call upon the Biden’s administration to step up to the challenge in Yemen and help end this dire and ongoing humanitarian crisis in Yemen,” added Sheikh. “